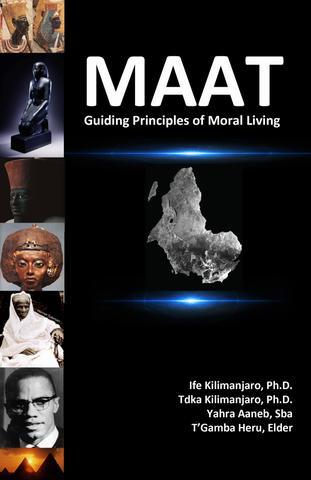 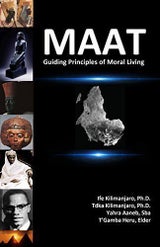 Maat: Guiding Principles of Moral Living 2nd Edition, 5th printing offers in a single book a compendium of ancient and modern enlightenment wisdom for personal cultivation, inner mediation, and self-correction. It offers guiding principles for living with purpose and dignity. Although we respect others, this is not a book about Judaism (Talmud, Torah), for we are not Hebrew; it is not a book about Christianity (Bible, New Testament), for we are not European; nor is it a book about Islam (Quran, Hadith), for we are not Arabs. They wrote (and/or assembled) their own books in the Levant, Rome, and the deserts of Arabia; they created their own religions and gods; and they made their own relics of morality, while conquering and enslaving nearly two-thirds of the world. African morality and ethics antedated the Hebraic Torah, European Bible, and Arabic Quran by thousands of years. And yet, every moral or religious idea they didn't write in their books is belittled as being inferior (e.g. pagan, kafir, acum) while those that are in their books are considered sacred scriptural emanations prophetically revealed exclusively to them by the gods they, themselves, gave names to. One could accept this, fit into existing arrangements, abandon truth, fall in line as obedient dotard dilettantes misleading the already misled, then just try to "get along" bowing and scraping as servile connoisseurs of everyone else's morality but our own. Or one could fight it, assimilate/redeem/restore our own ancestral wisdom into a creative synthesis, rebuild indigenous moral canon, and in so doing move future generations onto the path again to inner reflection and self-correction. In sum, our aim in preparing this book is to serve as a bridge, a portal, a medium for transmitting the transcendental wisdom of our ancestors across centuries---to absorb the best from preceding epochs, molding those into an enlightening repository of guiding principles.